I am heavily influenced by Martin Luther King Jr. Charles Spurgeon, Ron Susek, Ron Steinbrenner, which gives me the passion for service. I serve in Eldoret and preside over Blessed Intl. Min.

Today We will be speaking on Passion for service, being Passionate for service. We do not accomplish anything without a passion for service. Rev. Mel Davis, respected minister and elder statesman of the Kingdom in Canada, admonishes the Church with the words,

His statement is a principle relating to all levels of spiritual authority, but particularly to Christ. In (Colossians 2:19), the apostle Paul warned that some were

These words of the Lord apply first to His redemptive mission fulfilled in the work of the Cross, but entirely as well to the honor extended by the Church to the risen Lord. Speaking of Passion, it brings glory to God, as we serve him passionately we lift him publicly and bring the honor to him. Passion is the zeal, inspiration, and tenacity; with holy intensity and impelling spiritual emotion.

The Scripture presents the person of our Lord in terms such as:

When he cleansed the temple, his eyes flashing with fire, the disciples immediately recalled the words of the prophet, “Zeal for Your house has eaten Me up” (Jn. 2:17). He endorsed high praises, the voice of thanksgiving, and was blessed by the multitudes crying “Hosanna” and the children shouting praises. He honored Mary as she lavishly poured out the fragrant spikenard upon him. He stopped in his journeys to answer loud and unceasing request, as in the case of blind Bartimaeus and the woman of Canaan.

The word, “life” (zoe, divine life), is the word John chose in his early Gospel to describe Jesus Christ. Many years later (obviously still marveling at the incredible life he had been privileged to behold), he wrote,

The work of the Lord, to be accomplished, requires people with zealous hearts. The zeal of the Lord is like a great reservoir of spiritual energy, but it must wait for an avenue, a willing vessel, in order to find release. Matthew 11:12 enjoins zeal upon the saints in the words,

The imagery is unique, that of the assault of a city. Luke 16:16 says,

The kingdom (the city) of God lives in two dimensions: it is before us, and it is out ahead of us; it stands in time and in eternity. On one hand we set our hearts to apprehend spiritual inheritance in this life, and on the other we press on up the hill of Christian experience, anticipating the day when we will plant the flag of our personal triumph on the holy walls of the eternal city, the heavenly Jerusalem – home at last. The Amplified Bible says,

Passion is to be found in our worship, prayer, and in our service. David said, “My soul followeth hard after thee” (Psa. 63:8, KJV). Publicly and privately, in the congregation and in the closet, he poured out adoration on God. His testimony was, “My heart is fixed, O God, my heart is fixed: I will sing and give praise. Awake up, my glory; awake, psaltery and harp: I myself will awake early. I will praise thee, O Lord, among the people” (Psa. 57:7-9, KJV). Each day he called his soul into holy praises. Psalm 5:3 (MSG) says,

In regards to ministry and service, Ecclesiastes 9:10 says, “Whatever your hand finds to do, do it with your might.” Colossians 3:23-24 says, “And whatever you do, do it heartily, as to the Lord and not to men, knowing that from the Lord you will receive the reward of the inheritance, for you serve the Lord Christ.”

We are to put our heart into every task, and consider every effort a direct response to the Lord. The Bible says,

Passion is “fire in the bones,” and the Scriptures encourage it. David said,

The spirit of the Christian needs heat; even when cold it can recover its flame. While David was ‘musing’ – meditating, turning the words of God over in his mouth, causing his lips to speak – it set his heart burning. As the motion of the physical body brings heat into the body, so the action of the spirit brings heat into the spirit. We are not a lifeless instrument, some passive object that has no capability on its own, but are laborers together with God. For that reason, we must call up our affections. The words of Smith Wigglesworth are enlightening, “If the Holy Spirit doesn’t move me, I move the Holy Spirit.”

We have a responsibility to keep the fire burning strongly on the altar of our hearts. Nearness to God’s Presence and intense involvement with His Word are the two primary bellows that fan that holy flame. Those who spoke with Christ on the Emmaus Road, said,

Jeremiah, deeply burdened and weary of ministry at one point, said,

Jeremiah, deeply burdened and weary of ministry at one point, said, “‘I will not make mention of Him, nor speak anymore in His name.’ But His word was in my heart like a burning fire shut up in my bones; I was weary of holding it back, and I could not” (Jer. 20:9).A most compelling story is found in 2 Kings 13:20-21, that of the resurrection of a dead man as his body was let down into the tomb of Elisha, “Then Elisha died, and they buried him. And the raiding bands from Moab invaded the land in the spring of the year. So it was, as they were burying a man, that suddenly they spied a band of raiders; and they put the man in the tomb of Elisha; and when the man was let down and touched the bones of Elisha, he revived and stood on his feet.”

When the flesh of the body decomposes, all that remains are the bones, and in those bones can rest a fire that endures long after a person is gone. There was enough fire in the old bones of Elisha to revive a dead man’s body and raise it to life. In the lingering fragments of a holy preacher’s life, in his writings, in his testimony, you can find the fire of God, that when his bones are touched in future days, life comes forth in the place of death. D.G. Barnhouse wrote, “And sometimes, when we open the pages of the books of our libraries, we will find a living sentence spoken by someone whose body has been mouldering in the grave for centuries, and we are warmed by the words and feel our oneness with him over the years.” When there is fire in the bones, there is legacy. When there is fire in the bones, a man, though dead, “still speaks” (Heb. 11:4).

The Journey Of Single Parenthood (By Angela Nyakinyua)

Our Mindset – How Should We Think? (By Clarice Mwachala) 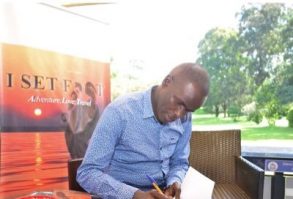